Safety and level of service

People use bicycles for transport, exercise, sport or pleasure. Along with health and financial benefits, cycling helps reduce consumption of fossil fuels. Thus reducing pollution, it helps conserve the environment. But there is a sharp decline in the number of people using bicycles in cities, mainly because of lack of safe and adequate infrastructure for cyclists.

Last fortnight, B B Majumdar of the Birla Institute of Science & Technology Pilani, Hyderabad Campus, and Sudeshna Mitra of the IIT Kharagpur reported developing criteria for the level of service to cyclists in small and medium cities in India.

The scientists used a radar-gun to collect spot-speed data of motorized two-wheelers and cars. They collected on-street parking data at each segment during peak periods. They did not consider autos, buses, and heavy commercial vehicles as they are generally not parked for longer durations.

The researchers categorised land-use type as residential, mixed, and commercial. They collected data of motorized-vehicle population by both manual and video graphic techniques in the areas.

The scientists requested sample bicyclists to rate the roadway segment with respect to its bicycle suitability after completing their journey in the segment, on a six-point scale, from excellent to very poor. They asked each respondent to assign a pavement-condition score to rate the quality of pavement surface influencing bicycling on the basis of the same six-point scale.

The researchers observed that on-street parking proportion had the strongest influence on the level of service as perceived by the bicyclists. Next were the motorized-vehicle population and speed of motor vehicles. Land-use type and pavement condition also significantly influenced bicycle compatibility  in this typical Indian context.

The researchers found out that the relative impact of these attributes on the level of service perceived by the bicyclists was significantly different from that observed in developed countries.

In a developing country, like India, a bicycle is an affordable and desirable mode of transport in many cases. The scientists suggest that exclusive protected lanes, free from motorized movement, be provided to bicyclists for their safety. Town-planners need to adopt a similar methodology to evaluate roadway segments and plan for better bicycle infrastructure for different cities in our country to make bicycling popular and safe.

Come monsoon, Delhi, Mumbai, Chennai and Kolkata grind to a halt. Vehicles stuck on flooded roads, people wading through etc. are regular shots on TV channels. One could use file shots from earlier years and the viewers would be none the wiser. 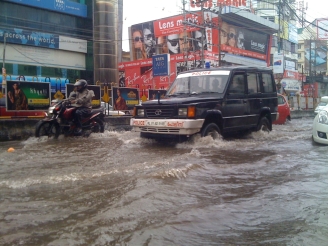 By Liji Jinaraj via Wikimedia Commons

Can we predict, or at least anticipate, what will happen to city roads this monsoon?

Vinay Shankar Prasad Sinha, Associate Professor at the TERI School of Advanced Studies, in collaboration with researchers from the Energy and Resources Institute, attacked the problem. They took Bangalore Urban district, covering a 4,313 sq. km in a single watershed, as study area. Bangalore has radial pattern of road networks converging in the core city area. The road network here is quite dense – about 8.2 km per square kilometre.

Which roads are more prone to flooding and when?

The team adopted Gumbel extreme value distribution, the most accepted and widely used method for flood frequency analysis and found that traffic in more than 40% of road length across the network can become affected in rare, 1-in-100 year, rainfall events.

They accessed a Landsat 8-OLI image of Bangalore. This had a spatial resolution of 30 m. The researchers merged it with its 15 metre panchromatic band to produce a 15 metre multispectral image using principal component analysis, a data fusion technique. Then the elements of the image were categorised: water bodies, forest/tree (densely vegetated), built up, sparsely vegetated surface, crop land, fallow land, and roads. These last were taken from an open street map and updated with the classified image. Thus the team had 5,740 km of road length in the form of primary, secondary, tertiary, link roads, expressways, and service roads.Which roads are more vulnerable to reduction in traffic movements during flooding?

They adopted the two-dimensional hydrodynamic model, MIKE 21, a general numerical modelling system used for simulating water levels and flows in estuaries, bays, and coastal areas. Depressions or manmade trenches, flyovers, foot over-bridges result in changes in the flow path. So the scientists used the digital elevation model from Cartosat-1 for terrain analysis. This has a 10 metre spatial resolution.

Areas near drainage lines are most affected followed by road cross sections and low lying areas. The team found that, though 43% of road segments are vulnerable, most road segments are under low and medium vulnerability categories. Segments under high and very high categories are only 5.8% to 9.6% of total road length. Therefore, through proper congestion planning and urban flood management, vulnerability can be minimised, say the scientists.

The study provides better understanding, for traffic managers, emergency response teams, and other concerned agencies, on how city mobility is going to behave during floods. The technique of taking in broad images with lower resolution and refining them to a resolution that is significant is a trick that reduces the complexity of calculations, yet provides the requirements for actionable data. Similar studies on other metropolitan cities need to be undertaken.