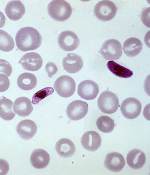 Diagnosing malaria is difficult because there are different Plasmodium species producing wide variations in symptoms. And blood smear test often gives false negatives. Researchers from three colleges in Bikaner have now come up with a new faster and more accurate, diagnostic tool.

Hydrogen sulphide, toxic at high concentrations, is an important part of out physiology at very low concentrations. A sensor that is sensitive enough to detect the changes in its concentrations are important in the diagnosis of many diseases. Indian researchers have now found a way, using the chromophore of a fluorescent protein.

Researchers from Andhra Pradesh show the world how to sort dermascopic images, to identify skin melanoma. Look out for more stories on STEAMindiaReports on how artificial intelligence is slowly revolutionising the future of diagnostics.

Early identification of babies at risk for neonatal sepsis mortality

Researchers from the ICMR-National Institute of Immuno-haematology and KEM Hospital show that there is an easy and quick way to assess babies at risk for mortality due to sepsis: higher variations in red cell sizes.

Diagnosing heart conditions from an EEG is not easy. Now Indian researchers in collaboration with those in Singapore have come up with a technique to automatically recognise congestive heart failure from EEG signals. Read on for more.

A paper based sensor to detect cancer by researchers from Delhi Technological University, Indian Institute of Science, Delhi University and Rajkiya Engineering College. Read on for details of this low cost diagnostic device.

Researchers from Gujarat comes up with a three-way attack on cancer cells without affecting normal cells. And the technique is useful to visualise cancer cells too. A method to see where the drugs are are acting. Diagnosis and therapeutics in one!

Cancer, according to a 2018 survey, afflicted two million people and killed approximately eight lakhs. In most cases, cancer is undetectable till the last stage. Therefore, simple and easy detectors are in demand for early detection. Now, Tanusree Roy from the UEM, Kolkata has devised an electro-sensor to distinguish between cancerous and non-cancerous cells based… Read More ›

Filariasis brings images of swollen legs or hands. But it can affect kidneys too. Ram Manohar Lohia Hospital in Delhi reports two such cases. Diagnosing of the problem is difficult for doctors in endemic areas and call for innovations to tackle the problem, say the researchers.

Researchers in NIMHANS, Bengaluru point out that the earlier findings about decrease in hippocampal volume in OCD patients may not be accurate. In fact, the hippocampus of OCD patients are more than in controls. However, in severe cases of obsessive compulsive disorder, the posterior part of the hippocampus seem to reduce in size.