The mycelia of mycorrhizal fungi in the soil make contact with plant roots, extend the reach of the root system of plants, solubilise phosphorous and improve nutrient availability to plants. In return, they take carbohydrates from plants. In fact, these farmer-friendly fungi help crops tolerate several biotic and abiotic stresses.

A clip from a video on arbuscular mycorrhizal fungus  Animation by Scivit via Wikimedia Commons.

But salinity and arsenic contamination in soil reduce the population of these friendly fungi.

And flooded paddy fields are also not conducive to these fungi.

Rice cultivation in the lowlands of Bangladesh and Bengal face these problems. 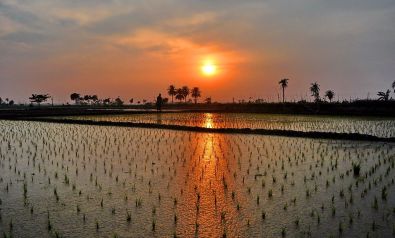 Last fortnight, researchers from the University of Rajshahi, Bangladesh in collaboration with researchers from Belgium reported the status of mycorrhizal fungi in such lowland rice fields. They selected 45 rice fields across eight different geographical sites in Bangladesh, with wide variations in salinity and arsenic content. All fields grew the kalijira variety of rice, known for its aroma, taste and grain quality. The variety is grown in flooded paddy fields that dry up towards harvesting time.

At the time of harvesting, the researchers collected soil samples and fine roots of five random plants.

The researchers isolated genomic DNA from the root samples and amplified the ribosomal RNA genes specific to the fungi. The amplified genes from the samples were then sequenced to identify the mycorrhizal genera. The genus Glomeraceae was present in more than fifty percent of the samples. Claroideoglomeraceae, Acaulosporaceae, Gigasporaceae, etc. were also identified but in small percentages. The team found a total of eight mycorrhizal families in their samples.

The researchers attributed the survival of these fungi in the flooded fields to the presence of aerenchyma (tissue with air spaces) in the roots of rice. Perhaps the close association with the plant allows the fungi to survive the anoxic conditions in the soils of flooded paddy fields.

So it appears that controlling the pH and improving soil organic carbon are steps that farmers can take – to help increase mycorrhizal communities and thus to improve rice crop production in Bengal and Bangladesh.