Samuthirapandian Ravichandran, Faculty of Marine Sciences, Annamalai University has been searching for pharmacologically useful biochemicals from marine organisms. Many potential antibiotics and anticancer compounds have been discovered in marine organisms in the recent years. 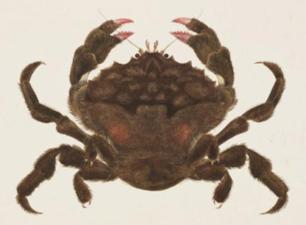 Now Ravichandran has turned his attention to sphingolipids in the marine crab, Dromia dehaani. Sphingolipids are a class of lipids which play a key role in the proper functioning of cells. They have been found to be useful against intestinal and cervical cancer. Ravichandran talked to Supriya Tilvi and S Prabha Devi at the CSIR-NIO, Goa. They too were interested.

To test, the team first induced cancer in male Wistar rats by adding small amounts of nitrosodimethylamine in their drinking water. In fifteen weeks these animals start losing weight. But in the experimental animals that received oral doses of hemolymph there was no loss of weight.

Even in these cases, the number of nodules was lower, adds Elangovan RethnaPriya, his colleague.

The team characterised the sphingolipids in the hemolymph using different spectroscopic techniques. In the active fraction, they found a sphingolipid similar to one that was earlier identified in cyanobacteria. The sphingolipid has been shown to be a platelet activator earlier – which provides clues about a probable mechanism of anti-cancer activity.

Sphingolipids from biological sources are assumed to be safe and recent evidence suggests the usefulness of sphingolipids as adjuvant in cancer therapy. However, clinical trials need to be undertaken before this sphingolipid can be used in clinical practice.