Hydrogen is one of the cleanest fuels, producing only water vapour. But to make commercial vehicles that can travel a few hundred kilometres, we have to create a storage system that can take about five kilograms of hydrogen fuel. Since hydrogen is a light gas, the volume of storage and the weight of the metal container come in the way of commercialising such automotive  technology. So the strategy for hydrogen storage has shifted to the use of cheap, light adsorbents.

Charcoal is a natural adsorbent of gases. Activated biochar with specific pore sizes – close to the size of hydrogen – can significantly reduce hydrogen storage material cost. But which is the best biomass that will store the greatest amount of hydrogen at ambient temperatures, requiring minimum extra pressure for storage?

The academic race to find the right raw material has begun.

The sprouts of the Palmyra palm, Borassus flabellifer, are easily available in the Deccan plateau. And their experiments show that the activated biochar made from it can store hydrogen well at ambient temperatures.

To make the activated biochar, the team heated palm sprouts to 350 °C under argon atmosphere to remove most of the non-carbon materials from the sprout. They then powdered the carbonized fruits, and mixed the powder with potassium hydroxide and water in a 1:2 ratio by weight. This was dehydrated by heating to 60 °C. The dried material was then heated to 900 °C under argon atmosphere in a stainless steel tube.

“At about 400 °C, potassium hydroxide turns into K2CO3. By the time it reaches 600 °C, potassium hydroxide disappears completely. And K2CO3 is converted to K2O and carbon dioxide when it reaches about 800 °C. These chemical processes etch nano pore networks in the carbonised material”, explains Sandhya Rani, a PhD scholar in Ramaprabhu’s Alternative Energy & Nanotechnology Lab. 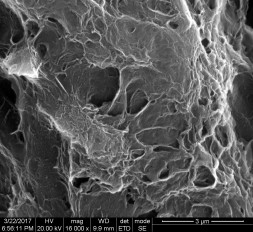 The team removed air in pore spaces by keeping the activated biochar under vacuum at 250 °C for two hours. They then cooled the system down and recorded hydrogen adsorption-desorption over different temperature and pressure ranges. Highest physical adsorption of hydrogen by the activated charcoal was recorded at 25 °C and moderate pressures of 15 bars. It can absorb more hydrogen than its own weight!

“Most of the activated charcoal derived from other biomasses either requires low temperatures or high pressures for optimum adsorption of hydrogen. To be able to store hydrogen at ambient temperatures and that too, with less than 15 times the atmospheric pressure is an achievement”, beams Sandhya Rani, IIT Madras.

“But, of course, we are nowhere near where we want to reach”, says S Ramaprabhu, the team leader. “Activated charcoal from different biomasses shows wide variation in adsorption efficiencies. Perhaps there are biomasses that may show even better efficiency at ambient temperature and lower pressures. So our search continues”.