The Western Ghats is a hotspot for frog diversity. In the last few decades, large areas of forest have been cleared to make way for coffee plantations, euphemistically called agroforestry. Many of these plantations use pesticides, chemical fertilisers and other agrochemicals which can impact amphibians. To what extent are the frog populations in such coffee plantations affected?

Researchers from the Kuvempu University, Karnataka selected six coﬀee plantations in Chikkamagaluru. Three plantations practised organic farming methods. In the other three, chemicals such as Bordeaux mixture, Lindane, Di-Syston, Chlorpyrifos, Bavistin, Phorate, Di-ammonium phosphate and urea mixtures were used. The plantations selected were far apart so that the movement of frogs from one to another is precluded.

The team went around each plantation every fortnight from July to November, scanning and searching for frogs. The frogs that were thus collected were measured, identified and counted. The frog species Fejervarya limnocharis was dominant in both sites. The team found 334 frogs from 11 species at plantations practising organic farming, and 258 frogs from 10 species at those using chemical fertilisers and pesticides.  Frog diversity and population were lower where chemical pesticides and fertilisers were used. 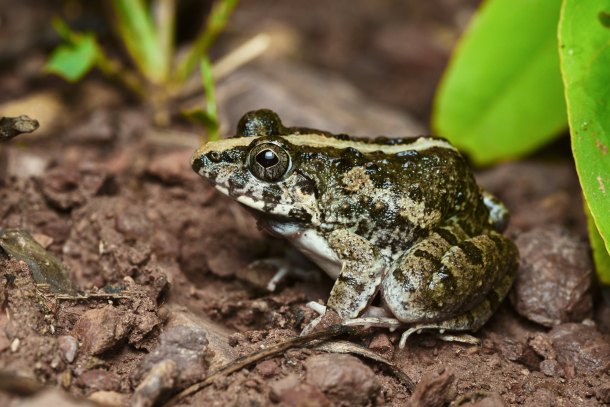 The researchers kept 30% of the frogs collected and released the rest into their habitats. Then they examined frog health in organic coﬀee plantations and plantations under chemical treatments.

The researchers found two common morphological abnormalities in frogs from both types of plantations: shortening of feet bones and absence of digits. Reduction in the size of the eyes was found only in frogs collected from plantations using agrochemicals.

The hepato-somatic index, a measure of energy reserve in the liver, was approximately 15% higher in frogs from chemically treated plantations. This is an adaptive response of the body to the hostile environment.

The gonado-somatic index, an estimate of reproductive success, showed that the females in the plantations using agrochemicals were more affected. Chemicals that disrupt endocrine functions not only increase the size of the ovaries but also have estrogenic effects.

The team observed very low activity of the enzyme, acetylcholinesterase, in the brain and liver tissues of frogs from agrochemical-driven plantations. Pesticides, especially organochlorines and phosphates, interfere with activity at the brain’s synaptic junction and cause malformations.

The same researchers had earlier pointed out the threat agrochemicals in paddy fields pose for frogs. Now they have extended their results to frogs in coffee plantations.  Unlike paddy fields, the Western Ghats area is a biodiversity hot spot and pesticides are threatening frog populations and diversity. This will impact the organisms in the higher echelons of the food chain.

Current Science is organising a workshop on science writing in Madurai.

Here is the link to announcement:

And here is the link to the application form: